Red-eyed proof that Thanksgiving is not for babies 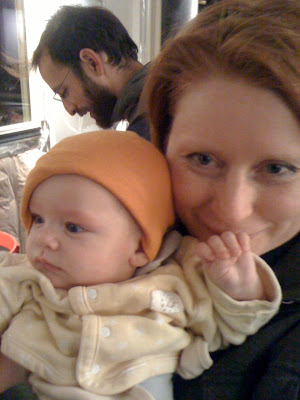 A yowling, howling cat, a briefly sleeping baby, Cowboy Junkies... Welcome to Monday. I have a few finds to share for your week.

The first was introduced to me by my friends Elina and Jeff: a thorough peacock of a Russian pop star, calling himself Vitas (see the video, below. It's worth it.)

And if you are looking for really light, but sophisticated, silliness to read, I highly recommend Sense and Sensibility and Sea Monsters, by Ben Winters and, yes, Jane Austen. It's not so much that the sea monsters fill the hole I always felt in Jane Austen (there was none) but they draw screaming arrows at all the social commentary people extol in her work. And it was a fantastic read.


Next, on the more tasteful side, lovely artwork on Etsy, by Melissa McGill. And, finally, I found two very small people this morning... 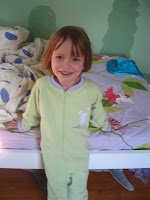 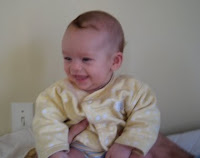 Posted by Julia Gandrud (aka JuliaLikesFrogs) at 9:47 AM No comments: 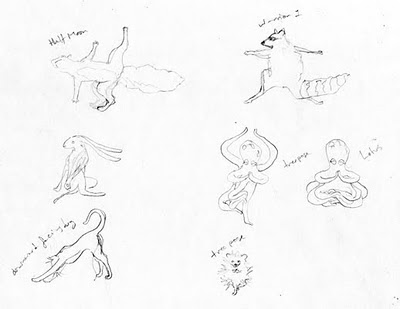 A friend of mine, Elyse Rotondo, is setting up a yoga studio, Om Kids. It got me started on musing over light-hearted yoga decor, and came up with a few four-footed models. Some of them have four feet twice over...

Word geekery of the day: the word "clock" originally meant bell. Then became a slang for hitting someone.

Eco geekery: pork is less bad for the environment than beef (according to this article.)
Posted by Julia Gandrud (aka JuliaLikesFrogs) at 9:37 PM No comments: 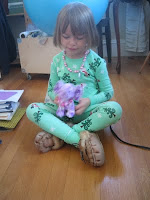 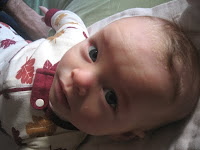 Posted by Julia Gandrud (aka JuliaLikesFrogs) at 1:06 PM No comments:

Telescoping with a pencil

My daughter cajoled a princess drawing out of my sister, and the sight of it sucked me into the back end of the eighties, the beginning of the nineties. Drawings can stay frozen in time, traipsed out for a little air every few decades, showing the last year when drawing was important to that person. For my sister, it was her late teenage years. For my husband, he was perhaps twelve. My brother in law might have been seven. We see this in their current drawings. Is their any other arena that allows for such archeology of the individual?

I reworked the hedgehog Juju painting, losing the blue background and the text. It used to say, "Does hope help?" but, combined with the wistful expression on her face, it made the whole painting a bit of a bummer, instead of the silliness I had intended. The result is still not particularly silly, but less grim, I think. 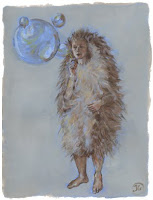 Posted by Julia Gandrud (aka JuliaLikesFrogs) at 9:04 AM 2 comments:

Last night, Lucy and I were present for the opening of "Collision" at the RISD Museum of Art. Granted, we were there to hear my fiddle teacher, Cathy Clasper-Torch, play her set with her band, The Gnomes (who were completely awesome.)

Still, Lucy and I willingly sat on the steps and listened to Saccoccio (how lucky is she to have four c's in her name?) give a talk about herding the artists into a collaborative mood and work. Saccoccio, perhaps in her mid 40s, was dressed in artist boudoire fancy funk, an extremely hesitant and nervous, but open, public speaker, with a phot

Her paintings were good. A lot of the work was good. The space was usually well considered, as Saccoccio herself had specified that all artists were to treat the space as the first participant. Most, though not all, succeeded. Tape streamers hung from the balcony, plumb weights hung from the spanners on the ceiling, videos were projected at and from and over odd angles. Absurd, semi-superheroic, besparkled Velvet Underground-on-inanity musicians (Slink Moss and Susan Jennings) played drums on the walls and bells on bellpulls. They were pretty good.

It was one big, coherent, fun, pretty, ugly, tacky, chaos. I liked it. It competed with the Lynda Benglis show, at least, the early work, over in the new building in shiny, 5yr old/crow attracting gaudiness. Perhaps less serious work? Serious is an important word in the art world. Well, I can't take art seriously to begin with (aside from Eva Hesse's work, and she died from it...) but I think this show dealt seriously with the now classic question of the "white cube" of gallery space. I couldn'

t help asking myself throughout the show, "Are they serious? They seem to take themselves so seriously. Shouldn't they?"

This whole experience set me to musing. You see were this is going, right? Yes, the question came up in my mind, "Why am I not in this world?" Answer: Perhaps it is that I am too shy, lack social skills, and like to sit in my room like a hermit crab? Perhaps I don't take artwork seriously enough? Perhaps I am too disorganized? Perhaps my work isn't good enough? Perhaps I don't want to be in that world? Don't know.
Posted by Julia Gandrud (aka JuliaLikesFrogs) at 8:59 AM No comments: 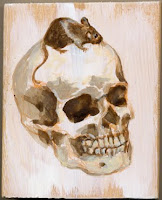 If you have a skull sitting on your desk, you might be tempted to paint it. This tendency afflicts many artists (my friend Eleanor McConnell pointed out that the whole genre is called Vanitas), and I am not immune... The mouse was not sitting on my desk, alas. That would have been so much more fun.

The painting of Bailey, my friend's sister's horse, is in its final incarnation. Now to pack, double pack, insure, and ship... 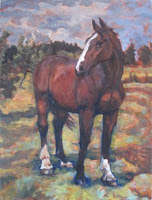 Buddhist quote of the day (ish) courtesy of the Interdependence Project:

"Holding on to anger is like grasping a hot coal with the intent of throwing it at someone else; you are the one who gets burned." -- The Buddha
Posted by Julia Gandrud (aka JuliaLikesFrogs) at 12:32 PM No comments: 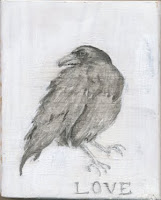 For such territorial displays of aggression, they must be family; crows and jays are both corvidae. I'm sad when the jays chase the crows (American crows) out of our garden, because I really want to host a few.
I read something on Wikipedia (my favorite website) about the intelligence of crows, and it really tickled me:

Another skill involves dropping tough nuts into a heavy trafficked street and waiting for a car to crush them open, and then waiting at pedestrian lights with other pedestrians in order to retrieve the nuts.

So, here is my little love-paintin 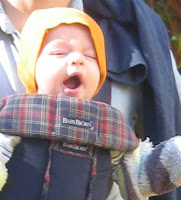 g to crows. And then a photo of Émile and Papa doing yard work... And last but not least, a leaf fairy. 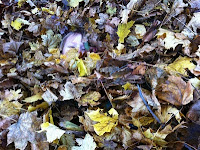 Does anyone know anything about amber teething necklaces? I was momentarily entranced with the idea of their soothing properties, but then the "science" brought me back from the brink of buying. These two (one, two) sites are most concise in their discouragements. Still, pretty, and I think I might g et one for Lucy and one for Émile (for his ankle? for later?).
Posted by Julia Gandrud (aka JuliaLikesFrogs) at 3:15 PM 3 comments: Posted by Julia Gandrud (aka JuliaLikesFrogs) at 6:36 PM 1 comment:

It's hard to concentrate when your spouse is generously trying to dance the baby to sleep, and the resulting howls compete with the music from downstairs. Poor monkey is teething.

ldren's board book. It's part of Willowing's free class, Art, Heart, and Healing. The first page is imagining my small self, and sending all of the wishes my adult self would have liked for that little person. The second page is supposed to be fulfilling the strongest desire my young self had, having a mother who cared for me. I substituted my young self with Lucy and Émile, thinking I should live in the present... but it did change the emotional flavor. I focused on what they might need that they aren't getting, instead of giving my own child self what she needed. Valuable exercise, but I may try doing it again, this time with me as the child.

My friend Clive McCarthy sent me a link to a New York Times article about David Hockney (who I have enjoyed ever since I saw the Hockney-grandizing film, A Bigger Splash.) It appears that Hockney still knows how to seize the moment, and the medium, and is producing creditable works on his iphone!

Posted by Julia Gandrud (aka JuliaLikesFrogs) at 7:03 PM No comments:

Election day brought tears to our household. I took Lucy and Émile to the polls. We got "I Voted" stickers, one for Lucy, one for me... I thought it would be cute to put mine on the Baby Bjorn, but, over the course of the evening, poor Émile got the sticker completely covering his ear, and Laurent tried to remove it. Many tears. Damn elections.

Émile is sick. Babies with colds. Need I say more?

Posted by Julia Gandrud (aka JuliaLikesFrogs) at 11:23 AM No comments: