A different way of painting landscapes

Plein air painting has many qualities to recommend it -- an appreciation of the imposing beauty of the natural world, a meditative experience, a simple excuse to pass hours of the day outdoors in fine weather, etc -- but I still wanted to see what it would be like to approach it as I do my animal paintings, and my portraits.

And winter, sigh, isn't far behind this gorgeous end of summer.

So I took photos from which to paint, prepared a canvas with a solid color I felt like resonating off of, did a preliminary drawing in one color of chalk (pink, this time), then grounded them to the canvas with acrylic paint of the same color.

Next I started creating the color scheme with more acrylic paint. And then this time, unlike in other paintings, instead of refining in acrylic, I moved on to oils. 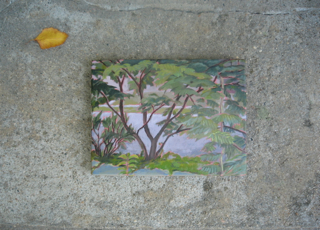 Some of the oils are water soluble, but most aren't so I just treated them all like regular linseed based oil painting. I don't use solvents or a medium, and then I clean up with vegetable oil, followed by regular dish soap. It works really well, and isn't dangerous in a child and cat-filled house.

The result has a less raw quality, more finished and even a little refined. Worth playing with, don't you think?

Posted by Julia Gandrud (aka JuliaLikesFrogs) at 9:28 PM No comments:

I have been watching April Verch videos, supposedly while painting (ahem), and have decided that she is modeling my new plan for good health: she fiddles like a brilliant madwoman, and tap dances out complimentary triplets, often while fiddling at the same time.

And I think doing even a tiny fraction of what she does would make me more fit than I was when I played rugby in college.

Here are a few examples:


And if all of that made you tired, and you need to sit down and read a book, I have a couple of recommendations.

If you haven't read Wolf Hall, by Hilary Mantel, already, you're in for a treat. I've never read such a sensitive, but not precious, novel, with so much bloodiness. It can make Game of Thrones look like dull, heavy-handed documentary.

Oh, fine, maybe I go too far there.

And then, in literary fantasy young adult fiction (yes, all of that), is Maggie Stiefvater's Scorpio Races. It's unusual in the current young adult world, in that a sequel would be a let down. It's such a tidy and wild story that there is no room for more. Man eating horses, an Inis Mor style island... Need I say more?

It's nice to read what I know I could never write, and these two women, in completely different genres, are clearly out of my league. Not even in the same ocean.
Posted by Julia Gandrud (aka JuliaLikesFrogs) at 12:58 PM No comments:

You might have noticed the increase in jellyfish population. It is generally agreed that this is related in one way or another to oceanic imbalances...

But individually, they are beautiful. And fun to draw and paint. 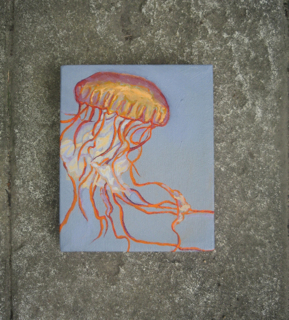 This one is from a morguefile photo, of what Wikipedia identifies as a sea nettle, or a Chrysaora jellyfish.

Pretty name. I also like real nettles, prettiness-wise. And eating-wise.

Have you eaten a jellyfish? I haven't yet, but I fancy we all might in the next decade or two, maybe in a nice seaweed salad. Yum.
Posted by Julia Gandrud (aka JuliaLikesFrogs) at 4:25 PM No comments:

A very hard week is finally over

A friend commissioned a portrait from me, and so today, for the first time, I was able to work on a quick sketch for the work. I'm noticing that working on it absorbs me completely, which is kind of a wonderful feeling these days. 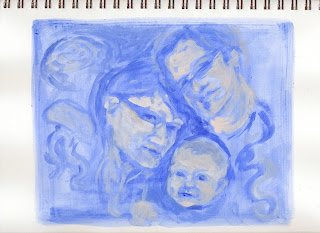 Plus she wants jellyfish in the painting. I think I would like to spend a while painting jellyfish. Méduse, in French, which I love. It is a more mysterious name than jellyfish, right?

Some brave souls intimated that chemo would get harder toward the end. I hope they were just talking about the AC bit of the menu, because I am not entirely convinced I could get through worse than this last week.

And I'm having dreams of fighting and catching villains who are wearing full plastic factory aprons, covered in wet grey paint... Metaphor for my very sweet chemo nurse?


Update: While Laurent went to get Lucy at camp I had a chance to paint -- not for long, but enough for another sketch: 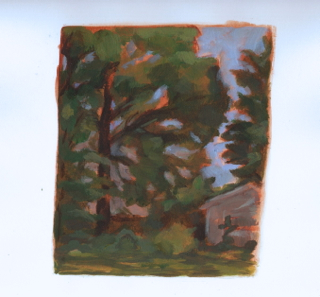 Home with the crickets

One child at camp, and one at school. It was a surprising morning, in that the house was quiet. I painted, in spite of the chemo and anti-nausea drug haze. 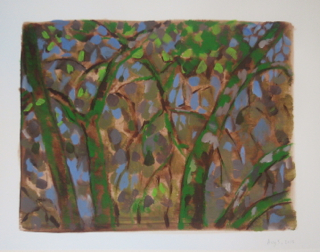 I have to admit that I was not feeling much fire in my belly as I painted today, but it was calming.

Emile, apparently, speaks way more English than we knew he did. He needed none of the translations from the cheat sheet his papa had made for the teacher. Hunh. Wonder what else we don't know...

Update: After noodling around all day, trying to decide whether it was better to sit, lie, or stand, I managed another painting. These quick paintings are very good at keeping my mind off things. 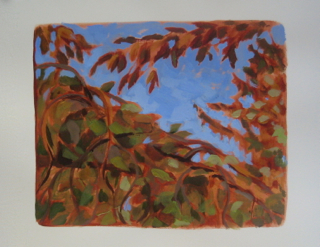 Posted by Julia Gandrud (aka JuliaLikesFrogs) at 9:51 PM No comments:

Last of the toughest of the good poison

Causes for celebration, from minor to major:

The VFW Parkway is a very beautiful way to get to Dana Farber.

I have no hair, so showers are quick, and I am rarely overheated.

I am done with the AC chemo part of the treatment, so I have only a couple more rough chemical outfall weeks to wade through, before I start the Taxol.

Emile got into the preschool we chose for him, and

Lucy got into the elementary school she chose for herself. She melted the teacher's heart.

I can still play the fiddle.

I have wonderful family and friends. And cat, who is currently compressing my feet under her considerable weight on the bed.

The tumors have disappeared! Even the oncologist couldn't feel them. This is fantastic.

Now for the less comfortable news:

At least that is a shorter list, right?
Posted by Julia Gandrud (aka JuliaLikesFrogs) at 1:43 PM No comments: