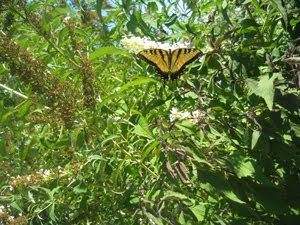 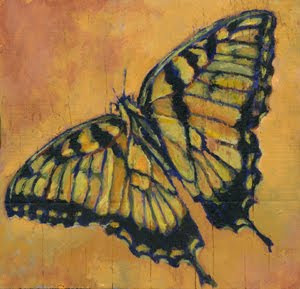 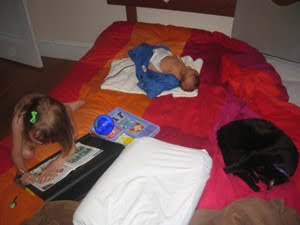 I am holding a sleeping baby as I type this... 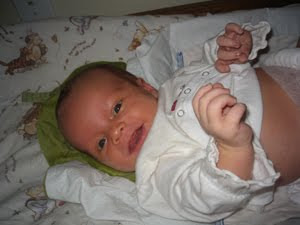 Yellow Swallowtail Butterfly out on the butterfly bush, and ran out with the camera. I have to admit, the creature is prettier than the painting.

Getting in the studio is not easy these days. It will change once my older child is back in school, though.
Posted by Julia Gandrud (aka JuliaLikesFrogs) at 2:47 PM No comments:

Playing on too little sleep 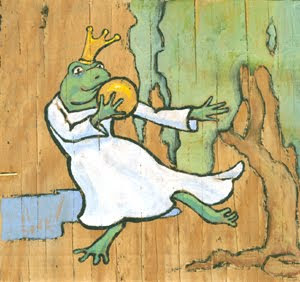 What if the frog prince already had a frog princess?
Posted by Julia Gandrud (aka JuliaLikesFrogs) at 4:57 PM 1 comment:

For those who might be contemplating giving birth in Rhode Island, I thought I might do a little compare and contrast with my experience in Berkeley, CA...
Shall we start off with the positives?

Rhode Island:
Air conditioning in August, very important. I was grateful not to have to leave the hospital too early.
The nurses in the Alternative Birth Center and the postpartum section were very warm, tended to be knowledgeable, and didn't torture me with excessive velcro ripping while I was trying to sleep.
We had one really helpful lactation consultant who helped determine that my baby was tongue-tied, and that was why he was doing so badly getting a good, non-painful latch.
Food was not spectacular, but decent and edible, especially considering my dietary issues.

Berkeley:
The lactation consultants were very helpful, and came in immediately after the birth, and for the next two days.
The midwife was super involved, competent, and active. I had complete confidence in her.
No one ever pushed inducing the birth, or talked about the doctors' "plans for me."
It was not assumed that birth should take place at exactly 40 weeks.
C-section rates were very low, and epidurals were a little less common than they are in RI (good or bad, I don't really know...)
It is always assumed that baby will be "rooming in," and that anything but out and out operations will happen in the recovery room with the parents.
Once we left the hospital, a nurse was sent to visit us at home, to check weight, health, nursing, etc.

Now for the negatives:
Rhode Island:
Obsession with inducing birth, having exact dates, c-sections if there is even a tiny hint of complications, even if the current pregnancy has been totally normal.
Triage was a NIGHTMARE.
The midwife group had only two out of five midwives who really inspired me with confidence; my fault, I should have shopped around.
Triage was a COMPLETE NIGHTMARE. First, they didn't let my husband in with me when the first nurse wanted to take my blood pressure. Then they kept me, in active labor, in a tiny room with a huge amount of equipment for an hour, being "monitored." When my sister asked how long we would be there, the nurse, a brute, replied, "A while."
Nurses were very reluctant to bring equipment, no matter how easy it was, into the room, and were constantly trying to whisk the baby off to the nursery, in spite of my explicit instructions. Once they even bullied my husband into it while I was in the bathroom!
The helpful lactation consultant came on the last day, AFTER my breasts had already been chewed on for two days.

Berkeley:
Most, though not all, of the nurses were irritating bullies who were not gentle or kind or calm with their patients. We got woken up at all hours, and were spoken to disrespectfully.
Food was a problem.

Conclusion:
My recommendation? Stay in Berkeley until you give birth, then get on a plane and go to Rhode Island to stay at Women and Infants while you recuperate, but be really insistent about the baby not leaving the room.
Posted by Julia Gandrud (aka JuliaLikesFrogs) at 3:30 PM No comments: