The whole house is under bicrobial (or viral?) siege. Lucy is just starting to ask about playdates again, while the last of us, Laurent, falls. I am pulling a page from Amy Chua's book, though, and temporarily disavowing all playdates. It feels liberating. 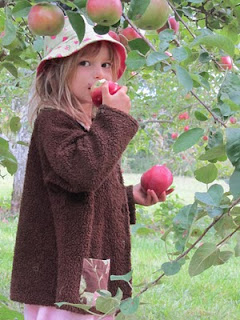 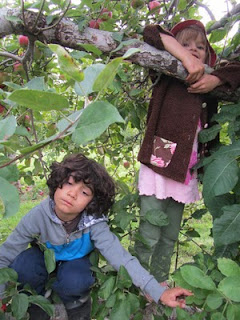 The photos are from our visit to Brimfield, Massachusetts last weekend, to go apple picking with our friends Camille and Owen. After an impish photo shoot, courtesy of Camille, we noticed that all of the leaves to Lucy's left were actually poison ivy... After a serious scrub down, we seemed to have escaped.
Posted by Julia Gandrud (aka JuliaLikesFrogs) at 9:00 PM No comments:

A little blipblurp of animation I made, showing a nursing mother and newborn baby.
Posted by Julia Gandrud (aka JuliaLikesFrogs) at 11:16 PM No comments:

I'm reading Amy Chua's Battle Hymn of a Tiger Mother. I can't put it down. It probably says something grim about my personality that I find her way-over-the-top strictness with her two daughters completely hilarious.

At the same time, I just read the NYTimes article on character and success in, and after, school, called "What If the Secret to Success is Failure?" Now I have a 24 point questionnaire for Lucy and Emile to evaluate my success as a parent.
Posted by Julia Gandrud (aka JuliaLikesFrogs) at 10:51 AM No comments: 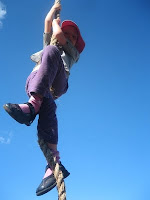 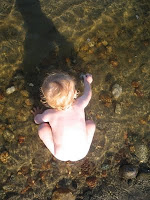 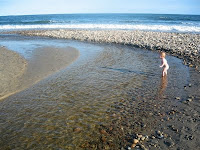 A couple of photos of the little people. Emile is in his natural habitat, and Lucy in hers.

School is treating Lucy well, I think. She isn't talking about it much, which, with loquacious Lucy, is unusual. But she seems happy, and doesn't usually hesitate to let us know when something doesn't suit her ("Maman, I don't like the way he laughed.")

For me, on the other hand, school is a challenge. There are two people in the class, aside from the professor, who follow perfectly everything that is going on, and make corrections in real time. I am not one of those two people. This makes me a little nervous, but I do enjoy playing with math again, even if I don't always get it.

I'm working on adding color to the music animation that I made. Made the straw gold. Next comes the goldfish.

Posted by Julia Gandrud (aka JuliaLikesFrogs) at 10:24 AM No comments:

Labels: Camille Collins Lovell, Introduction to Probability, Lucy, What Can I Say 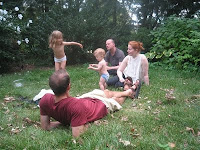 Summer is over, and Lucy is back in school. I miss her wild little self while she is away.

In the field of childhood, a lot of things don't make sense. For example, I have never seen a yellow duck, outside illustrations and children's toys. Eric Carle and Bill Martin's book is riveting for Emile, but it is not heavy on reality. Ducks are yellow, horses are blue, cats are purple. But then, how could that be worse for him than our having a black cat named Yellow? I suspect that learning his colors is going to take a while, especially as it is all confounded by hallucinogenic board books.

So, I am loosely planning for the writers month. On the site, they qualify that outlines are allowed:

Outlines and plot notes are very much encouraged, and can be started months ahead of the actual novel-writing adventure. Previously written prose, though, is punishable by death.

Maybe I will do that... But I have a math class that I will go and sample this afternoon, Introduction to Probability, at Rhode Island College, so we will see how much time I actually have.
Posted by Julia Gandrud (aka JuliaLikesFrogs) at 12:13 PM 1 comment: