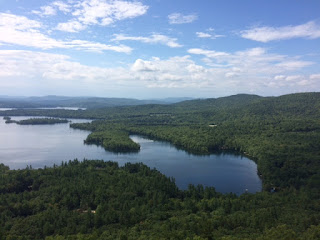 I just spent a weekend at Squam Lake, as part of the SCBWI retreat, at the site where On Golden Pond was filmed.

The swimming was wonderful, the loons lonesome sounding, and the Milky Way visible. Got to make some lovely, engaging friends.

Also, I had the great pleasure of getting a one on one session with one of the editor/mentors, the very kind Arianne Lewin, of Penguin Random House.

To which I arrived sixteen minutes late, nearly in tears, because first I got lost on West Rattlesnake Mountain for two hours.

Intending to do a loop, I went up the steep side. At the top, sweating, I enjoyed the view, but didn't linger, because I'd wanted to catch a quick shower before my meeting. So, then I went down the wrong side of the mountain, and didn't notice.

When I got down to the road, no clue that it wasn't even the right road, I alternated sprinting and fast walking. I was sure that the camp was just around the corner. At the office they'd said 10 minutes, but what did they know? (hah hah hah...)

20 minutes later, I figured that this was taking too long. Tried getting directions to Rockywold-Deephaven from passers by, who had no idea where I was talking about. One group of guys suggested going back up to the top of the mountain, which I considered, even though this would take at least an hour.

I was getting desperate. And trying not to cry. Too old to cry about getting lost.

Nearly forty minutes after reaching the base of the mountain, I found a kind family who were sitting in their car, at the base of an entirely different mountain, who helped me. They drove me all the way back to the camp. Wow. So grateful!

Confession: Not the first time this has happened to me (including being driven home by a kind stranger.) I've done this in the Alps, and in the Welsh mountains. Maybe it's time I learn the art of orienteering. Or just stay off mountains when I'm by myself, right? But no, that would be too easy, and I'm stubborn.

So, here's something comical: the site where we were staying for the SCBWI retreat was simultaneously hosting something called “Becoming an Outdoors Woman.” Clearly, I was enrolled in the wrong program.

Did you notice the mountain name? West Rattlesnake. That makes no sense, to me, for New Hampshire.

Or that rattlesnake was even more lost than I was.
Posted by Julia Gandrud (aka JuliaLikesFrogs) at 1:24 PM No comments: