Recently, I had an interview for an art teacher position at Upward Bound in Utah. I asked the internet for a lesson plan, and Mr. Matt Christenson supplied. Thank you, Matt! Here is my painting: 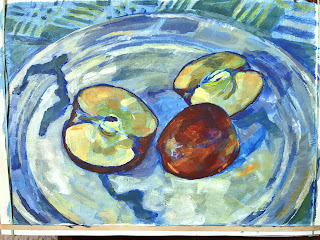 I used these materials: 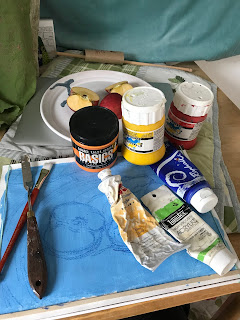 A word about brushes: wipe them on the old sock in the direction of the brush – metal to tip, away from the handle – pretty thoroughly before cleaning them in water. Before you use them, put your brush in clean water (a drop of soap in the cup of water won't hurt) and then gently fold the cloth over the paintbrush, and wipe it slightly dry. This will give you just enough humidity to keep the acrylic happy, and just enough dryness to keep it from running. Never leave them for more than a couple (2) minutes dry while you are using them.

Step one: make a wash with 1 part ultramarine (or cobalt) and a hint of the red, 6 parts water. Mark off a rectangle on your paper, leaving a centimeter border on all sides. Secure pages to the rest of the notebook with rubber bands, to avoid too much buckling. With your boar hair brush, fill in the page with broad, linear strokes, letting the color pool and play. Let dry flat for a couple of hours.

Step two: cut the apple in thirds, arrange them on a plate or other surface. With your pastel, begin drawing.

Step three: with your .3 cm brush, go over the lines you liked with your blue acrylic paint. 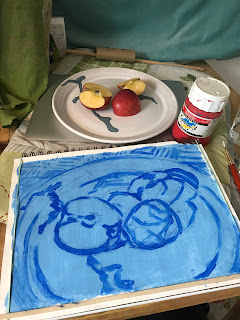 Step four: mix blue and red to make a dark magenta, and, with your chisel edge, touch paint along the edges of your apple. Don't brush. Then mix a quarter teaspoon white, a nail clipping of vivid lime green, a hint of orange, and begin drawing your edging brush from the dark outer rim toward the center core. Don't forget to mist your palette every 5 – 15 minutes, depending on the air's humidity level. 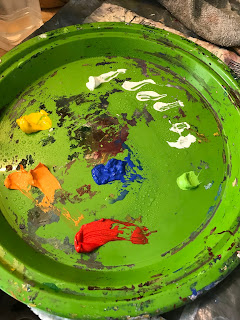 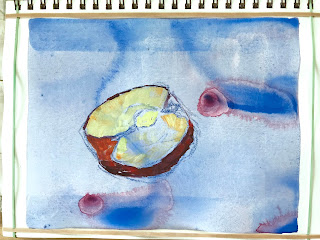 Step five: work outward from the center. Consider every plane. Try to use only the original colors on your palette. 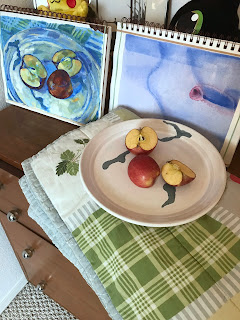 For a fantastic apple painting, here's something from (I kid you not) Linda Apple! 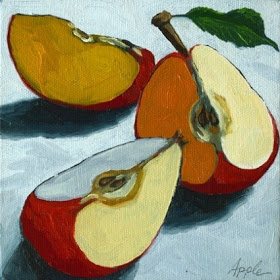 This lesson teaches value scales, unmediated artistic trust in your eyes, materials use, and understanding color interactions (how a blue background changes our perception of the colors we use).

Have fun! Point us to your results in the comments, if you like :)

Posted by Julia Gandrud (aka JuliaLikesFrogs) at 2:26 PM No comments:

The Saga of the Beginning Violinist

The first part of Emile's nightly violin lesson is the easiest, though least fruitful: asking him to go get his violin to start the lesson. It's easy, because I only have to repeat the request a few dozen times, without any further work on my part. It's fruitless for the same reason – at least until the moment when I hit the sticking point, and he finally goes to get the instrument.

Then comes the struggle to get him to stand straight, hold the violin correctly. He has a tendency to want to melt. Getting his bow arm not to flap out behind him like a chicken wing is a struggle, as well, because it bugs him to have his elbow touched. As a violinist myself, I can sympathize; I hate having my bow arm touched while I'm playing. He's fairly good about correcting his pitch when I point it out, though “up” and “down” and “flat” and “sharp” are still fuzzy terms for him.

The real trouble comes in getting him to repeat a section, play it differently. He wants to charge on. If he repeats, he wants only to repeat from the beginning, never midway. One of the adults in the Suzuki class was the same way, so I guess it isn't only little kids who are stubborn and resistant about such things.

Get him to read the music sheet, count the beats, be attentive to sound quality, stand up straight, play staccato when that's what's written, hold a note for five beats, keep his elbows in line …. It's a lot, and I know it.

The real meltdown comes when I ask him to play a new piece, and he doesn't want to. Then, oh boy, better hope that fiddle doesn't get crushed in the melodramatic flop. “Don't let the violin go bridge down, ever!” “No, the bow isn't a cane.” “The bow can only be an epee if it doesn't touch anything.” “Don't put the bow between your toes!” Reminders of things that seem obvious.

Two old pieces, and one new, every night. It seems unreasonable to him. It can take as much as ten minutes to scrape him back up off the floor. And if I get to play one piece along with him, I'm happy.

In spite of the drama, he's improving. His sound is good, and he's making real music.
Posted by Julia Gandrud (aka JuliaLikesFrogs) at 4:16 PM No comments: