Stencils, stamps, and scotch tape... These are a few of my favorite things!
Using some of the approaches given to painters by the printmaking world (more on this later – giving thanks to Edo Japan for opening up the ports to foreign commerce in the 1800s), I created the above video to show the process of playing with patterns.
My friend Rick Lescault's band, Skyjelly, created the music - Boy48 - and allowed me to use it.
I also received permission to share work from two stunningly talented students, Courtney and Ananya. They produced their solutions to this prompt: How can you make a patterned frog and its environment co-dominant? 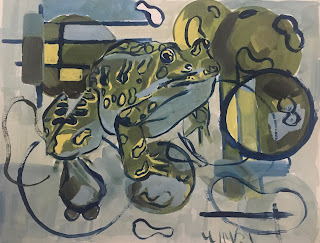 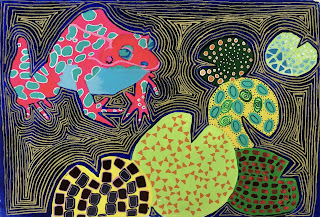 frog by Courtney, copyright Courtney 2021,
used with permission
Posted by Julia Gandrud (aka JuliaLikesFrogs) at 10:30 PM No comments:

Students are, as I have said before, the best thing that ever happened to my art making process.

Case in point: I teach one lovely woman who works in a hospital by day, and is exploring color and expression through oil paint on her off days.

We began with a simple-ish painting of a blooming dogwood in rain, but she quickly expressed a preference for the proto-Abstract Expressionist Hans Hofmann (1880 - 1966) paintings I shared with her. By the next week, she'd bought a book on the subject. 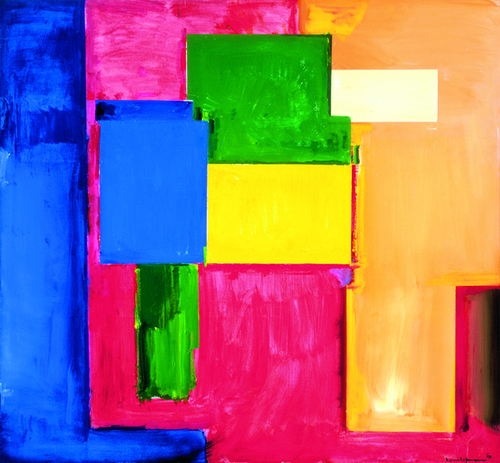 “I told a friend about Hofmann,” she said, “and he said, 'Hold on!' He showed me a painting of colored squares he'd done. But … it was just colored squares on a canvas,” she laughed.

Already she understands that Hans Hofmann's paintings are not just squares of color on a canvas. It's wonderful when a student comes equipped with such sensibility!

We decided to reproduce one of his paintings by following his process. The end goal would be to create on canvas what Hans Hofmann called "push pull," and Josef Albers called "non dominance."

Elaine de Kooning (the better de Kooning painter, in my opinion, and an invaluable annotator of art history as she participated in it) laid out Hofmann's approach in this fascinating article in Art News.

First, a complicated subject is required. I chose chairs around a kitchen table. 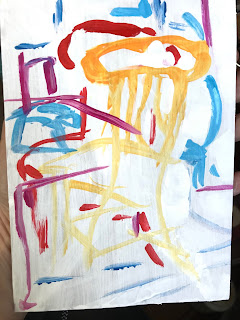 Hans Hofmann used a messy studio, and the predictability and familiarity of chairs and dresser legs, to help create a space we recognize in spite of the overlapping lines.

He then blocked out what he wanted to sit back, creating a central subject. 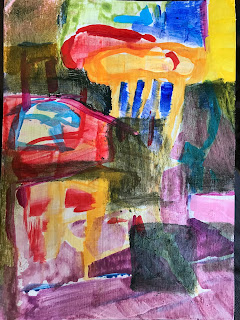 From there, he began to wrestle with light, immediacy, and push pull by creating large rectangular areas in pure color. 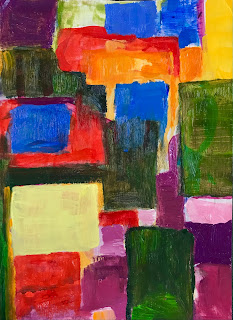 As de Kooning notes, “By this time (after three hours’ work), the artist was holding fifteen brushes in his left hand, and his four original colors had each multiplied into as many distinct tones.”

Try it out yourself!

Posted by Julia Gandrud (aka JuliaLikesFrogs) at 11:05 AM No comments:

Creating a color wheel may not be glamorous, but it's a great way to help beginner - and even some advanced - painters step up their color understanding.

In this post, I will only address the approaches for the creation of color wheels. Color schemes will come up in another post.

Here is a 12 color wheel with an acrylic base. Each inner circle approaches white, while the exterior circle is mixed with black. 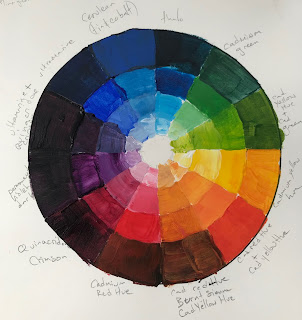 In the following oil based color wheel I have chosen different pigments. I always use three different blues - you simply can't capture all the sky and wave colors without them.

This time, the center goes toward gray, mixing in both mars black and titanium white with each interior circle. 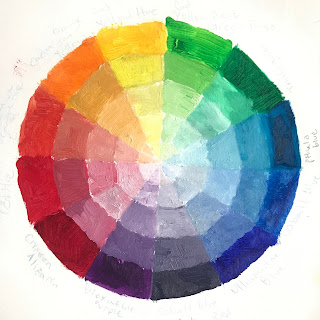 In the final color wheel, also oil based, the concept was to focus on the neutrals. I did this by mixing a touch of the opposite color on the wheel (what I sometimes brutishly but not strictly accurately be called its complimentary color). The result can lead to some beautifully subtle colors. 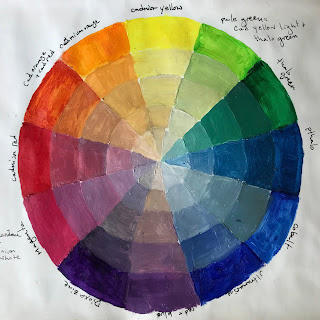 In that last color wheel, notice the transition from the warm purple to cadmium yellow - I have often seen this color in the shadows of concrete structures.

Posted by Julia Gandrud (aka JuliaLikesFrogs) at 2:46 PM No comments: