Women in abstraction: a century and a half of female artists at the Centre Pompidou

The Women in Abstraction show at the Centre Pompidou was arbitrary, condescending, and totally worthwhile. I mean, Elle font d'Abstraction is just short of “Look! A woman can make a painting! How quaint!”

Still, go. You won't regret it. They more than make up for any condescension... And if they don't, we're clearly hungry for this exhibit. I counted two women in attendance for every man – yes, really, I counted.

“The utopian ideals of pure abstraction have allowed women artists some kind of entree into art, since a truly universalist art practice would be genderfree... but it was a myth.” - Mira Schor, 2009, from “Some Notes on Women and Abstraction”

On a personal note, I hadn't been expecting to have a night alone in Paris. I certainly hadn't expected to have a good time. I'd always associated Paris with exhausting in laws, arguments, and trying to keep up with fast paced conversations in a new language. But my flight out of Charles De Gaulle was scheduled to leave at 1 pm (it didn't, but that's another story) and getting there from Normandy in the morning would have involved leaving before the cows woke up.

I got off the train and headed straight to the Centre Pompidou, one of my favorite museums in the world. It seems permanently under construction, always springing a leak – and the views are the best in the city. Here's one such view, featuring two Ruth Asawa sculptures. 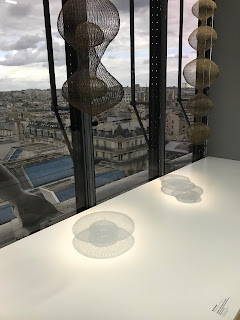 Actually, maybe the views are better at the Eiffel Tower, but I've never been in any kind of mood to enjoy anything by the time I've made it up there... Whereas the Centre Pompidou rewards a person for their effort. They have lockers big enough for carry on luggage, bathrooms, reasonable lines, and wonderful gift shops. Even in a pandemic. They required proof of vaccination, and appreciated my negative Covid test, but that was the only potential glitch. 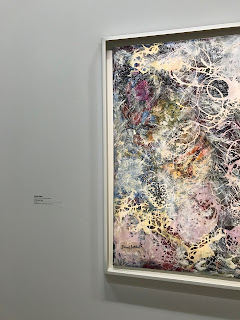 Like many people, I had known about Janet Sobel, the true prospector in the drip method gold mine Pollock so often gets credit for. And any art history class will teach the paintings of Helen Frankenthaler, the installations and performance work of Judy Chicago, the sculptures of Louise Bourgeois. Some of us may have been introduced to the three dimensional paintings and videos of Howardena Pindell, admired the paintings of Joan Mitchell or Lee Krasner. We might have admired the work of Hilma af Klint, or Sonia Delaunay-Terk (though the collage pieces of hers in this exhibit blow her paintings right out of the water for me.) 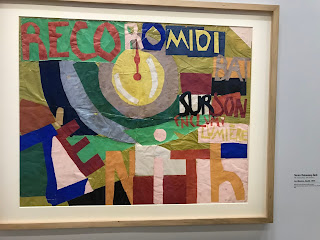 However, there were so, so many other artists I had never heard of. Here are two of them, followed by snapshots from the exhibition.

Georgiana Houghton (Spain 1814 – England 1884) was an English spiritualist painter. Her delicate line paintings create layered nautilus forms of a single color at a time, culminating in fine swirls and speckled curls as a totally visual poetry atop all the color. It makes me think of ocean tides and seaweed, and calligraphic decorations in mosques. Her paintings are already beginning to permeate and retrofit my visual memory of the world. 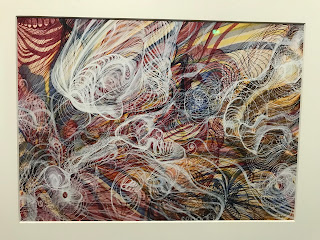 I couldn't come up with a more West of the Mississippi name if I tried. In fact, I have a very colorful Iowan aunt named Mary Ellen (“If you all aren't nicer to me, I'm going to Cherokee!” she used to shout, referring to the nearby psychiatric hospital. That was not the time her television was struck by lightning after she was "calling down the demons.") Ahem. Unrelated.

The music Mary Ellen Bute interpreted in the pieces shown at the Centre Pompidou modeled the Westward Ho!, Manifest Destiny kind of marching cowboy symphony that my Iowan grandmother loved. She also animated to Shostakovich, Saint-Saens, and Bach, but if those were on display I didn't see them. 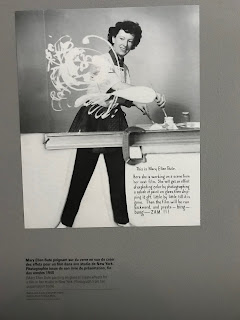 Her work, no matter what the music, is a delightful encyclopedia of effect invention. I don't need to point out to anyone that there was no CGI then, and she did all her abstract visuals with paint, superimposition, extreme contrast, and all the other old school tricks – many of which I suspect she originated. The exhibit had several of her films, and they made me think of the concurrent film, Fantasia, released in 1940. Like Germaine Dulac, another filmmaker in the exhibition, Bute clearly worships in the cathedral of light:

“I wanted to manipulate light to produce visual compositions in time continuity much as a musician manipulates sound to produce music." from "Abstronics" in Films in Review, June-July 1954. Reprinted in Russett, Robert and Cecile Starr, Experimental Animation: An Illustrated Anthology (New York: Van Nostrand Reinhold Company, 1976)

And now, in no particular order, a peek at inspiring work from the show! 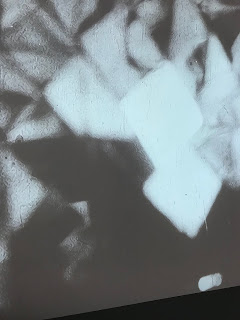 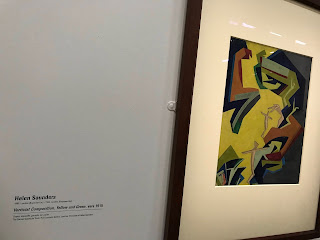 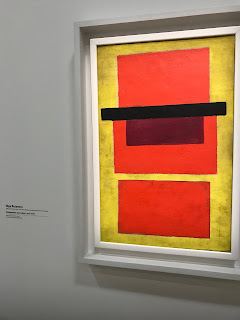 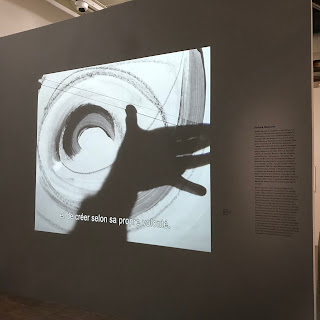 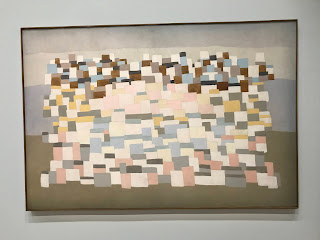 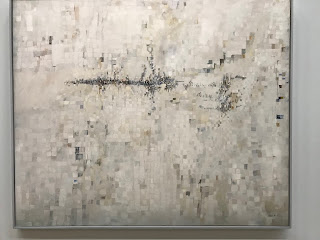 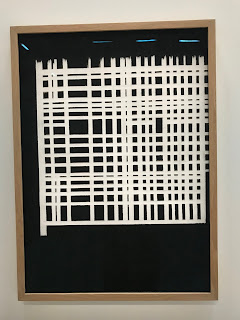 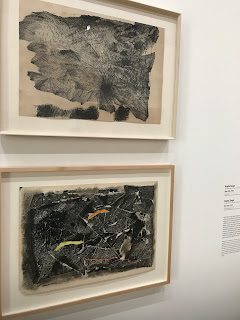 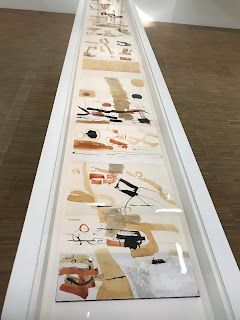 Etal Adnan
I'd booked myself a cute hotel room on rue Casimir Delavigne, with classic tiny courtyard, barely coffin sized elevators, and closet sized art deco room. I counted four bookstores within two blocks from the front door, and I don't think I saw all of them. I waited for an hour for a place at Le Comptoir, reading and skimming through the 113 photos I took at the museum.
Posted by Julia Gandrud (aka JuliaLikesFrogs) at 4:56 PM No comments: