Can Milarepa be in my painting? 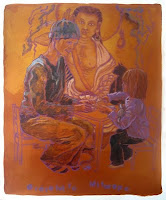 Like many others, I too am inspired by Milarepa (1052-1135). How could anyone not be inspired by him? A one time mass murderer who changes, and reaches enlightenment in one lifetime? Wow. The patron saint of imperfect parents.

Do you think it's hubris to use a Tangka in one of my own paintings?

Posted by Julia Gandrud (aka JuliaLikesFrogs) at 9:09 PM 1 comment: 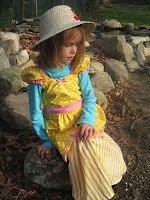 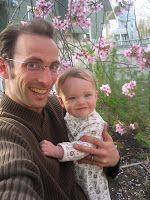 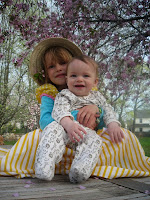 Lucy and Émile have been enjoying the cherry tree, now that it's finally in full bloom. I keep hearing the Japanese song, Sakura, as I see the petals dusting our patio
(lyrics from wikipedia)

Lucy's dress was her birthday gift from her parents, who compromised on princess dresses by buying from a seamstress on Etsy, Lover Dovers Clothing.

A few days ago I listened to the Terry Gross interview with the artist John Sarkin, who only became a professional artist after a stroke engendered his obsessive and continual need to create. Maybe I had a stroke at birth.

"Everybody is a genius. But if you judge a fish by its ability to climb a tree, it will live its whole life believing that it is stupid." ~Albert Einstein
Posted by Julia Gandrud (aka JuliaLikesFrogs) at 10:19 AM No comments: 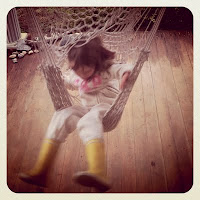 (Photo by my friend, Chris Nuzum)

I'm reading about homeschooling and unschooling. Homeschooling seems very well supported in California, but there is very little here in Rhode Island. No charter schools that have homeschooling as it's goal, no outreach from local public schools. A lot of catholics and other christians.

This has been a monumentally difficult week for Lucy and her parents. Émile is teething, and Laurent and I are very sleep deprived. And Lucy is being silly, not listening, having breakdowns from stress and lack of sleep. Ugh! She has told me that she wishes I was more like her friends' mom, quicker and laughing more; I, in turn, have yelled every time she doesn't listen to me. Lovely.

So I was really struck by these quotes from Sandra Dodd, an advocate for the unschooling movement (about which I am generally feeling uncertain):

This led me to think about Lucy and abundance. Our expectations of her are causing anxiety, and need for more love. What is the kindest way to love her now? Enforced bedtimes? No need for bath? Screw dinner, let's go for a pizza? Let schedules go?
Posted by Julia Gandrud (aka JuliaLikesFrogs) at 11:04 PM 2 comments:

Hedgehog food for my sister's birthday 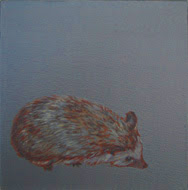 I made a companion for the hedgehog painting I'd given my sister a few years back. I hope they get along. Wikipedia cites snakes as hedgepig food, though... 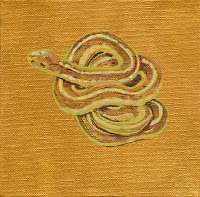 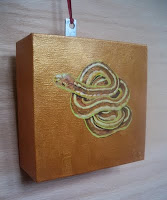 Posted by Julia Gandrud (aka JuliaLikesFrogs) at 4:06 PM No comments:

I appreciate the cleverness of curators of Etsy treasuries. Sooty Orange, curated by totallylegalpot (I love the name) is based on a quirky love, and evocative description, of a color combination. Yep, that's my hippo, standing proud among the sooty crowd. 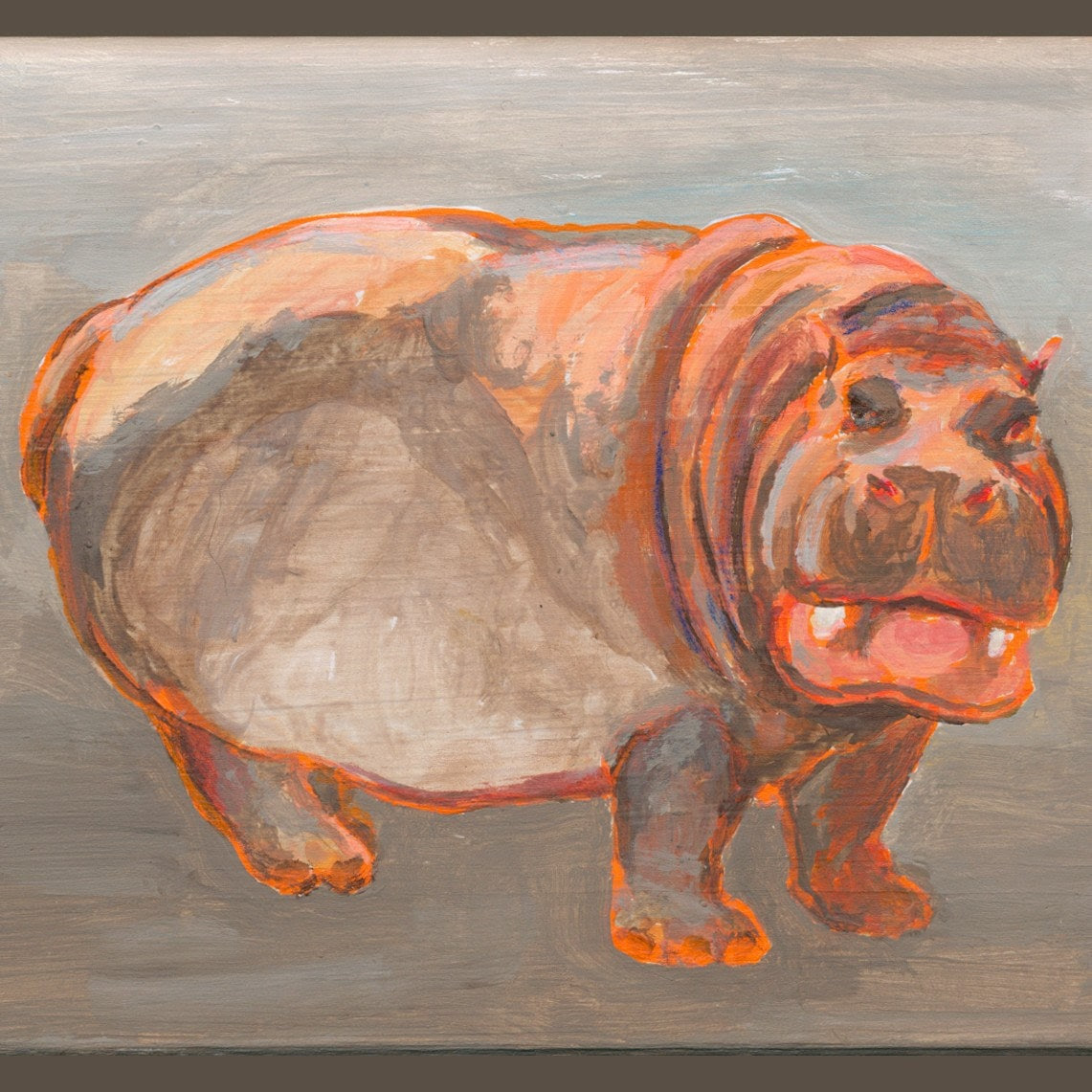 This is the second weekend in a row that I have made it to going to do a little meditation. Conclusion after round two? Man, this is REALLY boring. The most interesting thing about it is the endless ways in which it is boring. And how mundane, not mind blowing and trippy, it is to sit there and watch my breath. And how often I get uptight about my own failures to put my attention on my breath. But some part of me still thinks it's worthwhile to train my awareness to be able to stay put on the object I choose, and not flit around like a flour moth after my cookies. Obviously, I am not really dedicated enough to this, or I would actually be doing it. "There is no try, only do." Is that 70s wisdom, or just transcendental trash talk?

Don't worry, mind, you won't be going next weekend. One of the tortured religions has stuff going on next Sunday.
Posted by Julia Gandrud (aka JuliaLikesFrogs) at 10:01 PM No comments:

I made it to the beautiful Providence Shambhala Center to meditate this weekend, and it felt like a vacation. I find meditation difficult, and I am usually unsuccessful, but being able to sit without interruption for 20 minutes at a time felt extremely luxurious.

My sister sent me a link to this wonderful story about the nature of mind, told by a Los Angeles actor who ended up on a road trip with a Tibetan monk (sounds very 60s, doesn't it?), and now I have gone into online dharma mode. I started listening to teachers on youtube. Thich Nhat Hanh has a very entertaining metaphor for interdependence and ego.

And now I am researching whether crawling is really a necessary milestone for babies. Émile will resort to an army crawl, but really prefers walking to any other mode of transportation. We have been told that crawling is necessary for the motor development of the child, and that a child who never crawls is in for difficulty later. In general, the articles (one, two, versus three, four) are split over this. A lot of the gainsayers are basing their objections on a group of children in Papua, New Guinea. Physical differences exist between peoples, though, so I am not sure that one group proves that crawling is not necessary for the rest of humanity (which is also an argument against the absolute necessity of crawling.) The assertion, however, is that babies in the past were not put down, to avoid being burnt or eaten.
On the other hand are the pro-crawlers, basing their argument on anecdotal evidence, and I didn't see any thorough study on crawling's effect on speech and coordination. Let me know if you have better evidence!
Posted by Julia Gandrud (aka JuliaLikesFrogs) at 11:00 AM 2 comments:

Today I'm in the mood for octopus 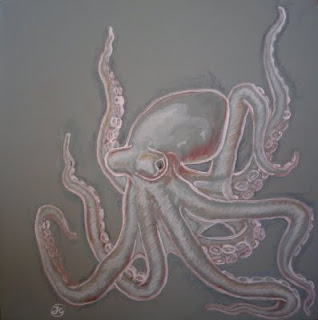 Octopuses are intelligent, in that they can solve mazes, and open medicine bottles, and have better memories than many of us, and yet they have shorter lifespans than mice. And that's just a small fraction of their weirdness. Moving eight legs individually, having independently functioning suckers, near human eyes, no bones or shells, and the ability to travel short distances over land... The weirdness continues. And so they are creatures that haunt our psychic story land. Unlike unicorns and dragons, these monsters are real, and beautiful, and ugly, and so very fascinating.

And taste good. Especially in okonomiyaki.

Imagine your hands were octopuses, typing emails to friends.
Posted by Julia Gandrud (aka JuliaLikesFrogs) at 8:14 PM 1 comment: