I have had fun drawing these for our solstice celebration this weekend, and want to share them with anyone who would like to make a mask for the kids.

Click on each to be directed to a higher resolution version (scanned at 150dpi, so I guess you would want to print it at that as well.) 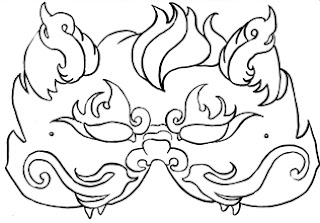 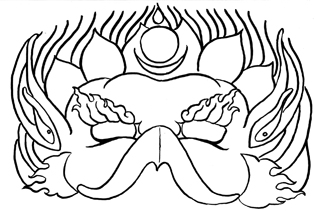 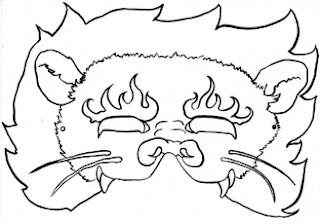 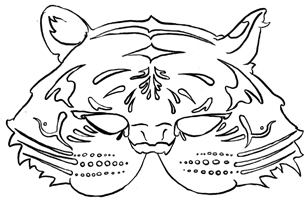 Posted by Julia Gandrud (aka JuliaLikesFrogs) at 5:39 PM 3 comments:

It is a glorious feeling, writing "The End" (I will spare you the all caps and the exclamation marks) after a month and some of intensive writing. Of course, the piece is not finished, but the first draft of it is.

I thought I would be this self-satisfied on the 30th, after successfully completing the target 50k words for NanoRhino, but that feeling was, if I could sum it up in a word, meh. It took three more days and 6k of writing, and I finally got that full frog feeling.

Play that damned fiddle tune in tune for my animation?

Finish the meandering and malingering book that I've been working on for a couple of years?

Write that new one that I'd laid out, planning to use it for this year's November folly, but changed my mind at the last minute?

Paint in every spare second?

Shockingly, one thing I will not be doing is catching up on all of the Doctor Who episodes from this last season. I am trying to divest myself of some paunch, and, did you know, you consume 70 calories per hour more doing nothing of interest or value than you do when watching television? Or some figure like that. I didn't actually stop to calculate, but perhaps you will, after reading this article.

Hah! I need not exercise!

(Yes, I know, that isn't true about not needing to exercise... )


I have started reading Emily of New Moon to my daughter. She loves it, it seems, as much as I did.

My sister saw me reading it to her, and wondered why I was inculcating my child with mysogeny from the Victorian era.

I have to admit, Lucy Montgomery's Anne of Green Gables , written in 1908, does smack of that "females must be squashed to be good" flavor, the same that keeps me from reading to my daughter the Laura Ingalls Wilder books. Ugh. I can't stand that "I must try to be good" ... um... dung.

But maybe A of GG was written earlier on L.M. Montgomery's marriage, the one she only entered into because she saw no other way to survive in a brutally sexist time.  (Just checked, thanks Wikipedia, and it was written before she got married.) Which may simply have lacked imagination on her part, as she seemed to do just fine as a writer and a journalist. Still, she let society pressure her into getting married, as she freely admitted, and suffered her own and her husband's terrible depressions for the rest of her life.

So Emily of New Moon, written in 1923, feels more honest to me. Emily is never the happy innocent that that god-awful Anne is, and she is a moody artist, a writer, rather than a milk toast version of Pippi Longstocking who submits willingly to being tamed by close minded puritans.

So those are my thoughts on that subject. And I thank L. M. Montgomery for hers.

Other posts about NaNoWriMo, and writing: The End of NaNoWriMo, Southerners must be laughing...,  NoMo what?, .
Posted by Julia Gandrud (aka JuliaLikesFrogs) at 2:26 PM 4 comments: