By this point in my packing, I have divested of most paintings and drawings I made while at college. Karen, one more portrait for you here. 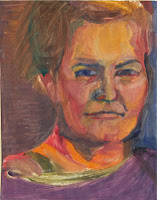 I have put all of my animal paintings on a half-off sale. 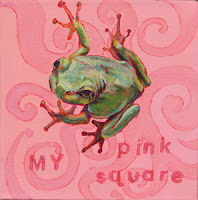 And now I am giving away a drawing. Digitally. Any stain glass artists out there looking for a design, this is for you. I was originally commissioned to make it for $25, but I thought it needed more work (I'd already spent two hours on it), and a higher ticket price... The commissioner walked away, offended. "It's not like I need the Sistine Chapel," she said.

Sigh. The undervalued life of an artist. Another reason to study Applied Linguistics.

My revenge is to give it to you! Happy way to let water pass under the bridge. Enjoy, some artist out there. 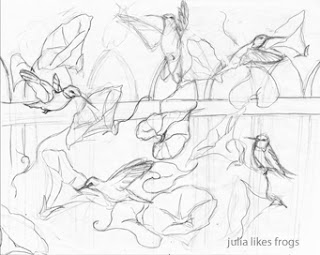 Posted by Julia Gandrud (aka JuliaLikesFrogs) at 4:24 PM No comments:

I recently lost my connection to a meditation community. I used to go to the space once a week to meditate, and sat at home for five, or ten, or twenty, minutes every day.

Now? Not sitting, not going anywhere, and feeling overwhelmed.

Of course, I legitimately have a lot going on right now.

On April Fool's Day my daughter had an abscessed tooth, from a cavity filled a year ago. The dentist said they couldn't guarantee keeping bacteria out, but that kind of seems like their job, to me... And then he wanted to fill the tooth with formocresol, in the formaldehyde family. Fortunately, I had my cell phone, and called my husband, who did the research.

Basically, it's a bad idea. Or, at least, most of the articles say bad idea, and one says it's safe (I think it's the same "it's safe" article cited each time). So he filled it with plastic compound (great...) and left a drain hole.

He also had to give her novocaine twice, because the poor kid has the redhead gene, making her resistant to pain killers.

She sobbed for an hour after the dentist, in terrible pain.

We made an appointment for a different dentist, a pediatric dentist. He ground the tooth down, and, after a recommendation from my pharmacist sister-in-law and my daughter's pediatrician, he agreed that a prescription for an antibiotic, even though it wasn't obviously still infected, was a good idea.

Now, a week later, plus two more visits, she is finally feeling better. Weird about the hole in the tooth, though.

And we have a house interiors painter, for which my sister and I chose colors. And we are packing. And we need to stage the place for photos and showing...

I could use a meditation community right about now.

At least the weather is looking up, gorgeous, actually, and so I'm no longer experiencing the seasonal depression. Yippee!
Posted by Julia Gandrud (aka JuliaLikesFrogs) at 2:59 PM 2 comments: