I imagine surgery, especially the anesthesia part, is really still at play in my psychological system. It has been less than two weeks, after all, since saying goodbye to any opportunity for more children (Yay! ahem) and goodbye to my shape.

Thank goodness I was never very curvaceous, as it makes for less of a transition.

I am already at the point where I can look in the mirror without cringing, though, when I come out of the shower. In fact, I'm feeling love for what I see.

Thank you Dr. Susan Troyan, at Dana Farber. She did a wonderful job with an infrequently demanded result: nipple sparing mastectomies with no reconstruction.

My logic for no reconstruction is that I loved my breasts, and did not love replacement ones. They would never have been the same, not even close, and would have led to more major surgery.

No, I'll pass. And I am happy with my decision.

But, as I said in my last blog post, the surgery is done, and now... I am scared, I have to confess.

Part of me wants to think that having had the surgery takes me out of running for death bingo. Yes, there is a part of my brain that believes that, if I avoid death today, I am golden for eternity. If it doesn't come today, it won't come tomorrow, and it won't come in some vague future that my optimistic human brain does not really grasp.

Those who die chose the wrong lottery number, says this brain, and that's too bad for them. It won't happen to the rest of us.

I saw Lou Reed play when he opened for the 17th Karmapa, maybe five years ago. I am shocked, emotionally, that such a figure has died. He has written so much of the soundtrack to my life, and has transformed in such interesting ways, that it's hard to imagine him not there. He chose the wrong lottery number. What a loser.

Goodbye, Lou Reed. Thank you for everything.
Posted by Julia Gandrud (aka JuliaLikesFrogs) at 11:48 AM No comments:

Surgery over, tubes out, no longer a cyborg

Wow. What a journey. This stop: Just Be With It.

I have had many steps and stages and levels and measurements along the way, and that made it easier to deal with this whole cancer thing. But those are done, and now I have to .... do nothing.

Exercise. They're all pretty clear on that. 40 minutes of getting my heart rate up, three or four times a week.

Don't drink more than a glass of wine a day. (Uh, no problem.)

"If it comes back, not in the same spot, it is incurable," is what I heard, more or less, from the oncologist. "But we are hopeful for you." Ach.

Breathe. One nanosecond at a time.
Posted by Julia Gandrud (aka JuliaLikesFrogs) at 9:54 PM No comments:

Surgery is in two days.

I am under an emotional waterfall, for now, so I took time out to paint, while Emile was napping, and Lucy was playing with a friend. 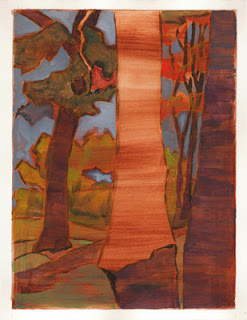 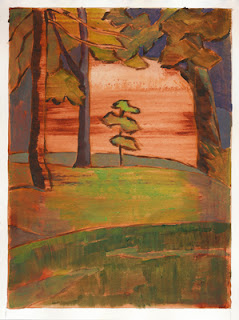 Posted by Julia Gandrud (aka JuliaLikesFrogs) at 9:52 PM 4 comments:

Painting is work. It is truly enjoyable work, but that doesn't remove the work part. And I don't always feel like doing it, especially when every part of me is grumbling with pain. But this appeals to me - no choice, just do it.

Wake up, eat, prepare a surface, get absorbed (hear that sucking sound?) by the world wide web, then get myself out the door, hopefully carrying all the requisite brushes and paint, along with a large enough supply of water.

Then the park for three hours. It always surprises me how much those three hours take out of me, because I don't notice the time passing while I'm there. Afterwards, however, I'm wiped.

You are reading the words of one of the newly minted park regulars. I have been frequenting one particular spot, where the landscape is pleasing and the shade is good (sun radically alters paint colors, and can't be trusted).

Two guys come every day to a spot a few yards from my favorite perch, one on his bike, one in his car. They meet on a park bench. They talk, and laugh, for hours, these middle aged men, unkempt, one sounding a bit boozy, the other just slightly off his rocker.

Today there was a strong aroma of pot. Fun times. Reminds me of Berkeley, a not unpleasant thing. 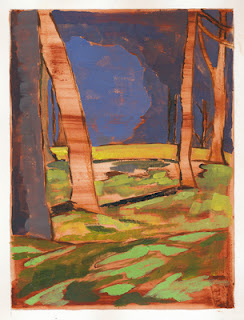 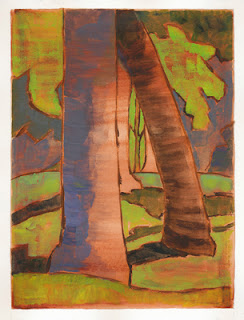 I've been experimenting with using the existing background in my paintings, treading on and stumbling over the line between undercooked and overdone. I'm waiting for the day when I come home and Laurent says, "Oh, you didn't finish today."
Posted by Julia Gandrud (aka JuliaLikesFrogs) at 9:27 PM No comments: