When being a virgo... drawing studies for a painting

Once in a while I become, shall we say, obsessively detail oriented. Maybe it is a lack of confidence, or maybe not taking deep enough breaths.

Or maybe some details just need attending to.

The small owl that I'm painting on linen has become, in my mind, a mural, something large, maybe a frieze on the side of the Mall of America.

In other words, it has become disproportionately daunting.

Partly because this bird has serious character, and I don't want to miss that. Nor the beauty. Also, I'm painting it for my sister, who has higher standards than there are devices for measuring such things.

Many, many owls have been drawn by me over the last weeks. Or rather, the same owl many times over. 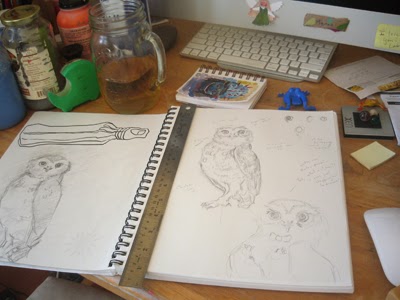 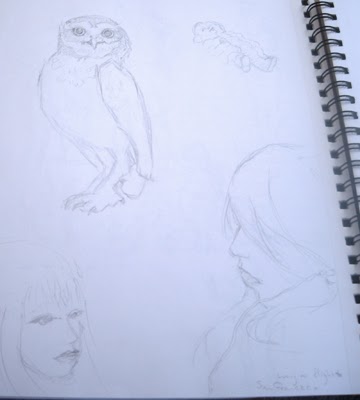 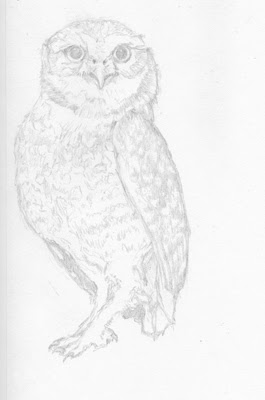 I remember being told the story of the zen painter (or maybe it was a chinese master?) who was commissioned to paint a rooster.

After a few months (years) the customer became impatient, and demanded to be given his painting.

"Well, if you are in such a hurry, I will do it for you now!" With that, the painter pulled out ink and brush, and painted a flowing, balanced rooster.

"I paid you that much for you to spend less than a minute making this?" spluttered the outraged customer.

The painter smiled, and invited the other person back into the studio for tea. Once there, the customer stopped and stared all around.

On every wall, on every surface, was a painting of a rooster.


What does it mean? Clearly, the painter was obsessive compulsive, and had problems with self-confidence. 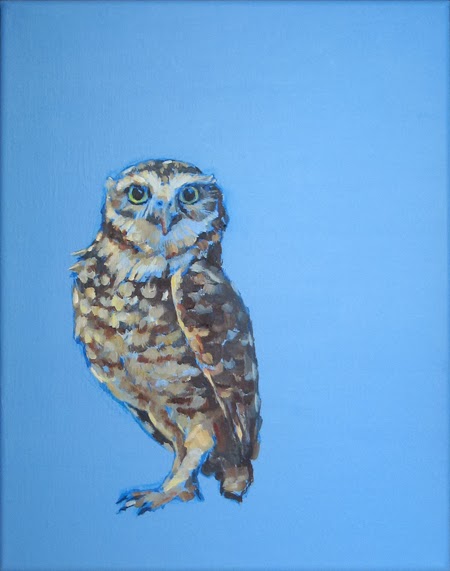 Posted by Julia Gandrud (aka JuliaLikesFrogs) at 6:27 PM No comments:

I get these daily messages from the Enneagram Institute, and this is what barely kept me from rewatching old Doctor Who:
The Direction of Growth for Nines is Three. When healthy Nines go to Three, they become self-assured and interested in developing themselves and their talents to the fullest extent possible. How can you more fully develop yourself today? (The Enneagram Institute, Personality Types, p369)
Grumble.
Still what with snow and children and weekends and such, I am asserting my rebelliousness by not meditating.
I think perhaps that I recognize that last bit of identity assertion as being lame.
I painted a wee little monster instead of watching a traveling time-lord. May I introduce to you the Tarasque? (hmm. sounds like TARDIS, and similar blue color...) 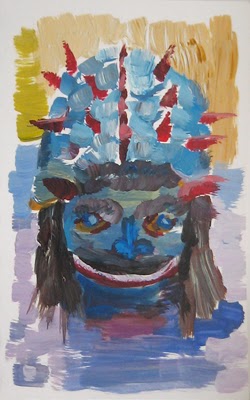 The Tarasque was a monster on a rampage in Nerluc, of Provence, France. According to one story it had a head like a lion, legs like a bear's (but six of them), the body of an ox wearing a turtle shell, and the tail of a scorpion. It burned all it touched, until Saint Martha tamed it, brought it back to the town, but the people killed the now docile beastie.
Sad story. But the townspeople felt bad and renamed their town Tarascon...

And now a few words on loneliness from Krishnamurti:
“The entity who tries to fill or run away from emptiness, incompleteness, loneliness, is not different from that which he is avoiding; he is it. He cannot run away from himself; all that he can do is understand himself. He is his loneliness, his emptiness[.]” On Love and Loneliness p56
Posted by Julia Gandrud (aka JuliaLikesFrogs) at 9:21 PM No comments:

It is beautiful outside, with last night's new fallen snow.

We went for a walk in the woods, Lucy and Emile in the wooden sled behind us. Behind Laurent, more accurately, as I did none of the pulling.

Then, perversely, I came home and painted this sunny spring abstractish landscapeish painting. 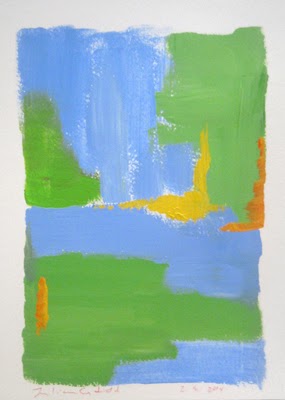 Emile and Laurent are back out in the snow, at Roger Williams Park, sledding.
Posted by Julia Gandrud (aka JuliaLikesFrogs) at 5:48 PM No comments:

In an effort to build my anti-sloth muscles, I am trying to cut down on reading, radio, and Dr. Who.

I feel happier. I think.

Here's a remix of an earlier frog, commissioned by a friend: 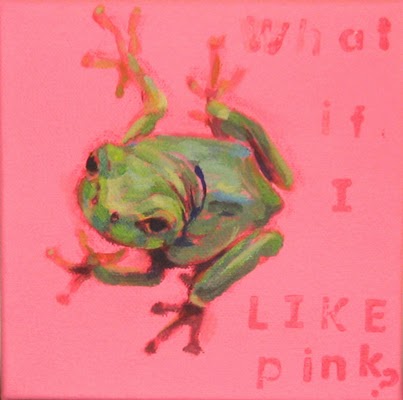 Posted by Julia Gandrud (aka JuliaLikesFrogs) at 2:03 PM No comments:

Labels: frog painting, media fast, semi-daily painting, what if I like pink

Progression of a portrait painting in acrylic

Nine figures. If you include the jellyfish. 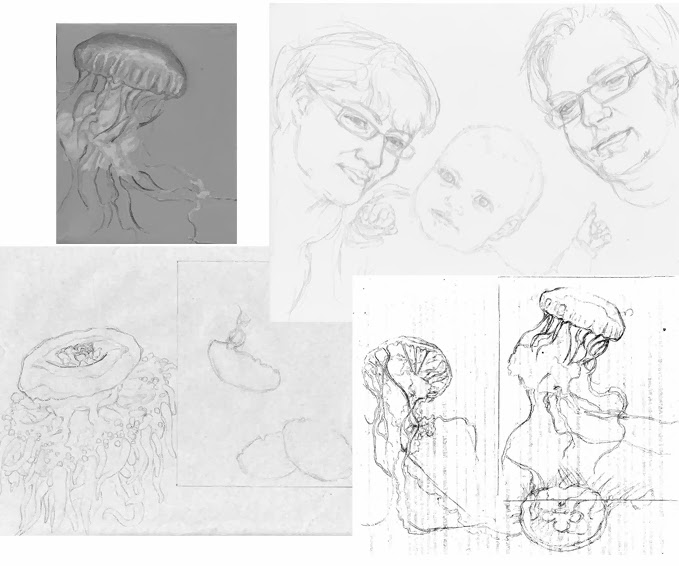 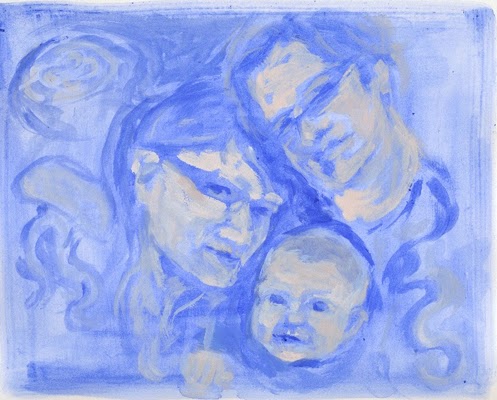 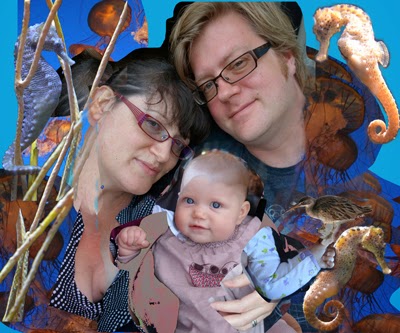 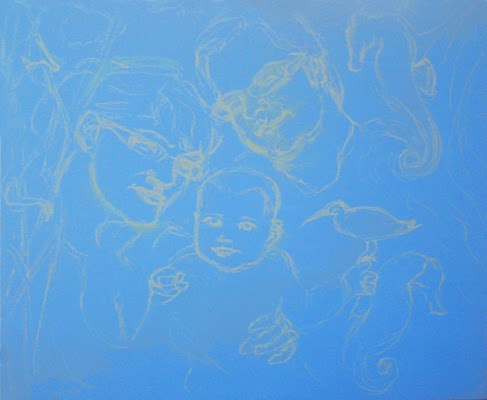 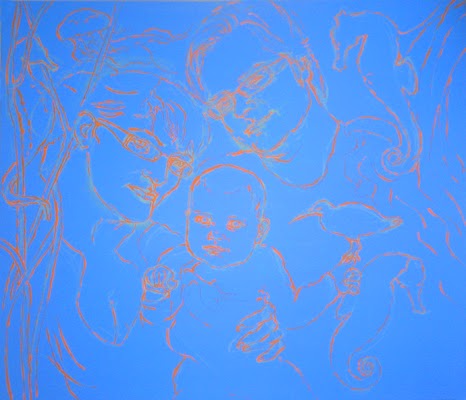 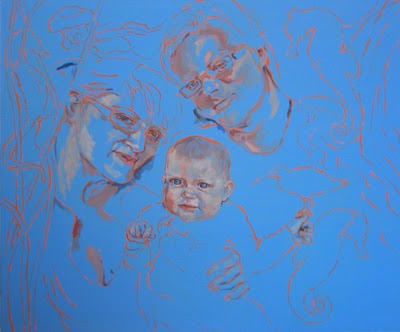 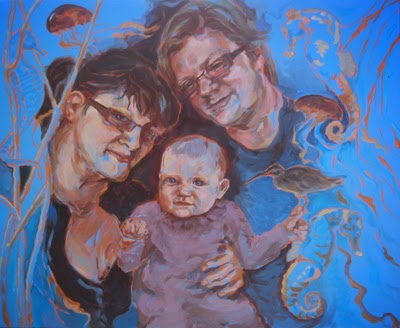 Now I think I'll put some matte gel on it to finish. Or maybe some other varnish... I'll have to research this.


ETA: the only varnish I found which is non-toxic is the high gloss from Liquitex.

I'm not keen on high gloss. So I think I'll skip the varnishing thing.

Posted by Julia Gandrud (aka JuliaLikesFrogs) at 3:46 PM No comments: 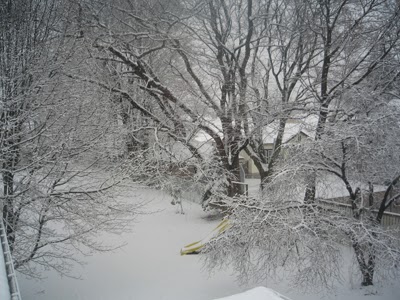 Posted by Julia Gandrud (aka JuliaLikesFrogs) at 1:49 PM No comments: