The latest thing I've learned about writing is something I really didn't want to know. It's this: I write best in the morning, before I've even stood up to make my morning tea.

I am so not a morning person. I hide for the first hour after I wake up, if I think it'll help me avoid talking to anyone. My husband gives me a hug, and then beats a careful retreat, because I am a grizzly bear if I've been awake for less than that required hour.

Mornings are for tea, toast, and dark chocolate.

But then, in some freakish lack of judgement, I put the computer where I could reach it in the morning, and actually started writing as soon as I was awake.

You know this is nonsense, right? I really love it that I've discovered the way to circumvent my brain's endless chatter, endless need to “check” something on the internet. When I'm still waking up, strangely, I care little about the outside world. It's the perfect time to write.

Even a cup of tea niggles me into the rip tide of to do lists and insecurities, but it's still better than trying to write in the afternoon, or late morning. Those are doable, especially if I turn the internet off, but much harder. As Chogyam Trungpa Rinpoche said, we're like big babies, always searching for a nipple to suck.

Less so in the morning, apparently. At least for me.

Posted by Julia Gandrud (aka JuliaLikesFrogs) at 6:37 AM No comments:

Slowly moving back in to Etsy

A friend told me it would take five years to start feeling normal again after cancer.

I'm finishing (still!) the daughter-demanded sequel to a middle grade book I wrote for her a couple of years ago, and slowly getting my feet back under me on Etsy.

Uploaded sea turtle below. Happy to be online. 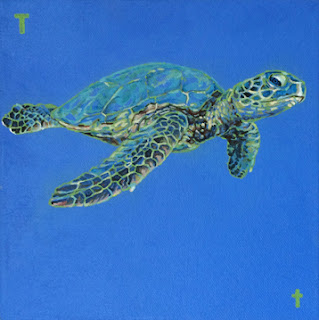 Posted by Julia Gandrud (aka JuliaLikesFrogs) at 11:16 AM No comments: