The myth of due dates 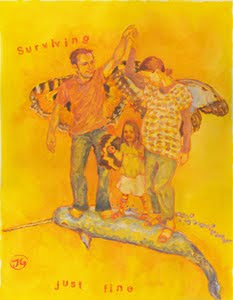 I have decided to stop working on my painting. I think I have a sense that it is the last I will ever do, so it needs to be perfect. I'm fighting against that impulse, and keeping it in its final, flawed state.

The End of Pregnancy?
People in this area are really into inducing labor and having C-sections. Over the period between 1996 and 2007, Rhode Island had an 82% increase in c-section rates, according to USA Today. It's over 30%, I think! And across the nation, the induction rate may be 21%, according to this 2007 article by Gail Braccidiferro.

I didn't agree with my due date (thought it was too early) and now I am a few days over, so I went to do a little searching on the "science." What I saw in this article by Henci Goer made me laugh:

How long does pregnancy really last?

You might be surprised how the idea of a 40-week pregnancy came into being. In the early 1800s a German obstetrician simply declared that pregnancy lasts ten moon months counting from the start of the menstrual cycle prior to the pregnancy. (2) It took nearly 200 years for researchers to investigate whether this was, in fact, true. It turns out that it wasn't. When researchers in the late 1980s followed a group of healthy, white women with regular menstrual cycles, they discovered that pregnancy in first-time mothers averaged eight days longer than this, or forty-one weeks plus one day (2). The average was three days longer than forty weeks in women with prior births. The researchers also refer to other studies suggesting that other races may have average pregnancy lengths that are shorter than white women.

As you can see, the due date was only a probability that labor would begin sometime around that day. It was not a certainty, much less a deadline. Until recently, obstetric practitioners defined a full-term pregnancy as extending anywhere from 37 to 42 weeks. Today, many obstetricians call any pregnancy lasting to the beginning of week 41 "postterm." This, you will note, is one day less than the average length of pregnancy in first-time mothers.

Posted by Julia Gandrud (aka JuliaLikesFrogs) at 9:25 PM