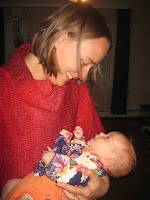 In another 2 to 3 months, Émile will sleep without startling himself awake. This startle is a cute little monkey reflex, called the Moro reflex, after an Austrian who, according to Wikipedia, "discovered" it, around the turn of the last century. Really? Discovered, like no parent had ever noticed that newborns wake themselves by acting like they're falling? I'm stodgy, I know, but I think words should be used more carefully than that... 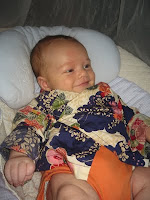 Getting Émile to sleep still involves dancing, often to rap. This drives my husband nuts, especially when it's Cypress Hill. I can understand hating Cypress Hill, even though I love them. Even I can see that they are obnoxious. Interestingly, they are still making music, a new album called Rise Up. I kind of thought they'd be in jail by now. 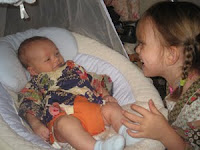 In the photos: Anne, Lucy, Émile, and me. 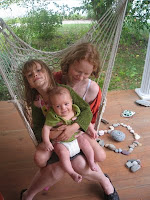 Posted by Julia Gandrud (aka JuliaLikesFrogs) at 3:30 PM