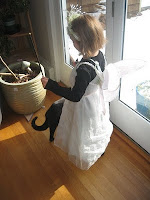 I listened to Claire Dederer on OnPoint, and feel like I recognize her story of growing up in the 70's with a mother who felt trapped by motherhood, unable to find herself, to be free. My mother's answer was to meet a new man, dance and drink all night, and forget about her daughters, until the day, a decade later, that she had a religious revelation. Dederer's mother sounds a little less troubled, but her mother's new man was named Larry, just like my mother's...

And, after listening to the interview with Cordelia Fine, Laurent and I discussed an old chestnut, whether or not there are hard wired sex differences in the brain, taking chess achievement as an example. But then, it only takes a minute on the internet to refute the idea that men and women are 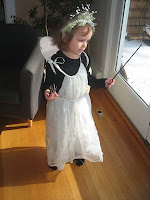 very different there: Judit Polgár was chess Grand Master at a younger age than either Kasparov or Bobby Fischer, and chess people tend to care about such things as "how young was x when amazing achievement z occurred"... Point being, time puts more and more of those old biases to rest, so, um, like, shouldn't we trust time to do away with the rest of them, too?

I notice that I treat Émile a little differently than I treated Lucy as a baby. I think I treated her more like a flower--hard to explain, but I think I projected the girl and woman I thought she would be, and I am similarly projecting a, this time completely nebulous, but masculine, future on Émile. It's very illuminating to a die hard feminist like myself to confront my own gend 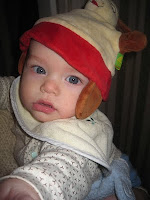 er expectations. Who cares if she wears fairy dresses? Who cares if he does? Either way, I'd rather that my expectations don't limit them.
Posted by Julia Gandrud (aka JuliaLikesFrogs) at 4:08 PM