All in all, still thinking pain is better than seasickness

I spent a lovely weekend talking with friends I hadn't seen in a while, and playing a touch of music, too.

My friend Camille (last year I made an animation for her music video) brought her fiddle, and introduced me to a few fiddle ornamentations, for both Mairi's Wedding and The Butterfly -- grace notes and double stops!

But her main advice was that learning to play with other musicians, in a session or just informally, is like learning a new language. You have to get over the wanting it to be right and perfect, and just mess up like a little kid. I'll have to look for some sessions to test out that approach. 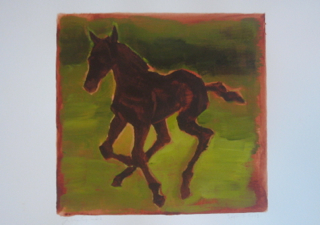 Today, now that the monkeys are back in school after the long weekend, I painted a foal for Lucy. She approves. She's been asking me for a horse painting for a little while. (Thanks to MorgueFile, and kelpie.)

I'm assuming now that Emile will want the same.


This bit of the cancer treatment, chemo number two, is a chemical called Taxol. According to my friend Camille, it originally comes from the bark of the Pacific yew tree, and is also found in some type of fungi. She cited it as a classic argument for looking into herbal medicine.

All I know is that I'm relieved it isn't the AC (cyclophosphamide, doxorubicin), which "helped" me lose fifteen pounds. Insert unhappy face here.

Taxol makes me hurt, but doesn't keep me from eating, drinking, hugging my children. Hard, but such a relief! And it only hurts for a few days.

These achy joints might be a preview of old age, and, if I don't make it out of the five year mark (the standard "cured" date for triple negative cancer, I have been told) then maybe I should be grateful for this glimpse now.

Update: Yes, I broke the law. I took the car, sans driver's license, to Roger Williams Park to do a little landscape painting. I was too achy to be actually plein air, but I at least got to sit in the car and do this little painting. 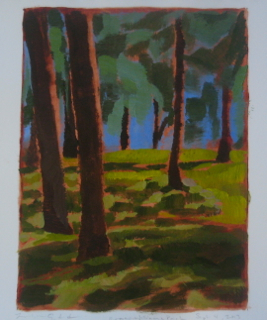 Posted by Julia Gandrud (aka JuliaLikesFrogs) at 4:20 PM