Pooh sticks, fairy songs, and the sound of aurora borealis

Brown and beige haired heads on Catholic school blue uniforms turned toward me – only one other redhead in the sixth grade.

I was proud that my work had been noticed, that I had been seen as worthy of standing up in front of the class to read what I'd written.

Two paragraphs in, my nuclear reactor nervous system started overheating, my face lit emergency red. Too much high soaring language. I felt I wasn't supposed to write words like this – it was not fitting in with my peers. And too, I'd been taught this was “purple patching”. I'd written one typed page, maybe two? Two would've been worse.

But the teacher, Old Dragon Breath, made no critical comment when I finished, and no one said anything mean. 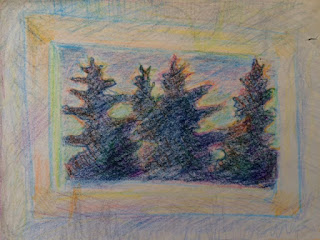 I'd read my class a description of something strange at my grandparents' farm house, in the northern third of Minnesota. Their nearest neighbor was a mile away, the nearest town many more.

While grandparents slept – for farmers late is after 9pm – I kept company with velour couches and thick carpeting, and the “brother” electric typewriter lodged under a small wall light.

(Who else used that maddening machine? Why did my grandparents have it?)

There was singing. The sound waves weren't localized, not like a radio. I don't know when I noticed it – maybe it started out resonant, like Mozart's Requiem in D Minor – Kyrie – or maybe softly. But like the Requiem, it was a large chorus of voices, and beautiful singing, male and female.

I looked out the kitchen window, down the towering row of evergreens edging the quarter mile driveway. Black trees against gray sky, nothing else. I wondered then, in my memory now, if it was the sound of the trees, but I can't recall if there was wind.

I don't know how long it lasted. It left me shaking with excitement. A little afraid, when it was gone.

I've told the story many times. I told it to my daughter, when she asked about whether I had ever seen fairies. “No, but –”

My daughter recently recounted the story to my sister, who said she'd been there, too. Parallel games of Pooh sticks: drop the twigs in the water, run to the other side of the bridge – “That one's mine!”

On the web I found the theory about the sound of aurora borealis, and I like that. I don't need to know what it was. Explanation doesn't make it smaller, or worse, or better.
Posted by Julia Gandrud (aka JuliaLikesFrogs) at 11:10 AM