My library fine and fifteen tabs open on my web browser would seem to say he is very interesting to me. Or, alternatively, that I am working very hard at making myself interested in him, and failing.

I asked myself, "What would the world of computing look like if Alan Turing had lived?" I quickly found that others had already asked this question, wrote Quora posts about it, and published books on the subject (fantasy by Rudy Rucker, imagining the writer William Burroughs and Turing in a relationship...)

But it turns out that I am most interested in an idea not everyone agrees upon: Turing as someone on the Autism Spectrum.

Steve Silberman pointed at the irony of so many people on the spectrum being the source of the Nazi defeat in WWII (think Manhattan project), even while the Nazi's began their massive Eugenics machine by killing autistic children.

Maybe the might of the Allies was already on the spectrum, with Alan Turing, in WWI? Impossible to know, now, surely.

I'm also twisting around the complementary ideas of the Imitation Game concept, which was the first heading in Turing's great paper on computing. Three ideas float in my head:

1, those endlessly turning cogs of the bombe, Turing's machine for decoding Enigma;

2, that Dr. Asperger thought that only boys and men were affected by the autism spectrum;

3, that the imitation game is the perfect analogy for how so many women describe the experience of being high functioning and on the autism spectrum. 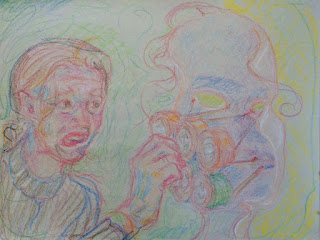 Posted by Julia Gandrud (aka JuliaLikesFrogs) at 7:32 AM